Getting DJ interested in things isn't a tricky thing to do. DJ really likes to learn new things everyday! The hard part is keeping him interested in something until the project is completed, or the concept is mastered. This guy will have you helping him get started in various projects and at the end of the day he has several things going on and not one of the things are finished. The very next day he will work on the project, start another project, and add another project to the unfinished project pile. By the end of the month after all the projects are piling up he will say "Oh yeah I was working on this project", begin to work on the project, and yes the cycle repeats. I haven't exaggerated one bit describing the method to his madness, I will add that DJ is a well rounded individual and takes pride in saying all of his school subjects are his favorite subjects. So lets get to what I want to share with you that has brought back some interest in learning about multiplication. At one point when DJ was first learning his multiplication he knew his facts well up to the six tables. Then his interest died down, and then I think the Rain Forest had his attention, or maybe it was building his own race track. Now we had a review of the mulitpication tables, and he found out that "when you don't use it, you may lose  it".

Lucky for him, he is the youngest so I have a few tricks up my sleeve to get him "interested" in learning his multiplication facts. It actually caught him off guard, and when he started listening, a big smile appeared on his face. 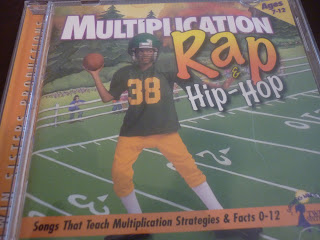 DJ ran for the dry erase board and begin to write the facts as the music was playing. 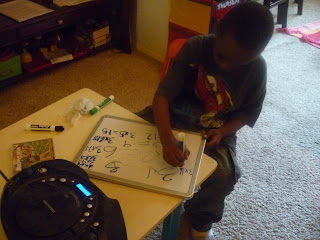 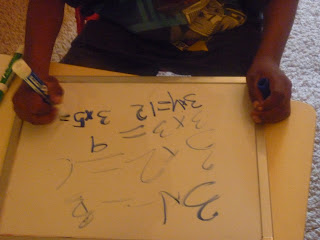 I guess you can also consider this post a heads up on how DJ may be learning about one thing and I may blog about something he is learning that is entirely different the next day. I think this CD may keep his interest for a week. I'll  definetly share with you if the CD is still in play. You never know it may break a world record for DJ. Until then at least I know he is learning some multiplication facts along the way without me having to nag.

Email ThisBlogThis!Share to TwitterShare to FacebookShare to Pinterest
Labels: Math